Two days before the race, at 10am, The Nation’s Triathlon sent out an email titled “Important: Swim Portion Cancelled.” Every one of the thousands of triathletes got that email, and by 10:30, the Nation’s Triathlon Facebook page was blowing up with angry triathletes. Triathletes are as good-a-natured bunch as they come, but you mess with their race day schedule, and they will cut you.

And, the upset is understandable. Triathletes spend months training for their races, a there’s a lot of hope and optimism that goes into a race. Plus a lot of money. Race fees, travel, hotels, child care, etc. Triathlons are expensive and for a lot of people, triathlons are the pinnacle of what they have trained their bodies to do. My loss of the swim portion of the race was upsetting, but I can’t imagine being the person who lost 50+ pounds, who turned their health around, with the triathlon finish line in sight the entire time.Sweating away, eating right, feeling miserable sometimes, with that beautiful finish line gleaming like a beacon at the end of the tunnel. Only to have their first full triathlon taken away, two days before the race. With no refunds.

When I got the message about the swim being cancelled, my resting heart rate hit a new high. I was so angry. Plus, I knew that rainfall affects the DC sewage system negatively for water conditions, and we have had pristine weather for the last week. What gives? I was so upset. I almost cried at work because this was to be my mom’s first triathlon, and I was so proud of the work she had done in the pool. She trained her butt off for the last couple of months, and the swim was supposed to be the big challenge. Pushing her comfort zone. And that’s what the cancellation took away from her and so many people.

I was originally livid with the Nation’s Triathlon race organizers. How did this happen? Why did they cancel it TWO DAYS out?? Water conditions can change, and calling it two days in advance had me frustrated. But, instead of throwing something, which I admittedly wanted to do, I instead checked the DC regulations for the Potomac River. See, DC has a ban on swimming in the Potomac because the water quality is so iffy. And to think, I made fun of Rio, when the “most powerful city in the world” can’t even keep it’s river water safe. Embarrassing. 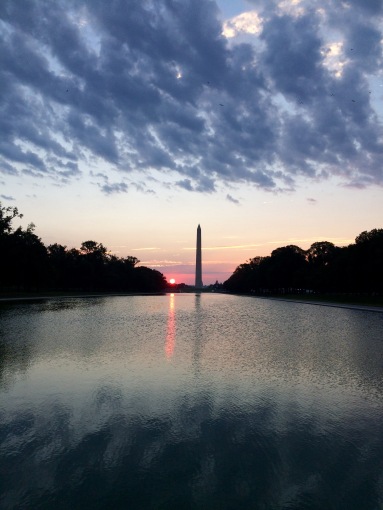 (Reflecting Pool, morning of the race)

The Potomac water quality is regulated by the DC Department of Energy and Environment. I haven’t been able to find a date the Potomac swimming ban was enacted, but safe to say it’s been banned by DC for a while. The DC Department of Energy and Environment (DOEE) started receiving requests for temporary lifts of the swimming ban for special events, and in 2012 they instituted a process to receive a special permit for events involving the Potomac. If you know anything about DC government, you’ll know it’s generally poorly run, and full of bureaucratic red tape.

Anyone who wants a special events permit to use the Potomac River must demonstrate that the bacteria levels in the river are within DOEE accepted limits. Now, the burden of proof rests on the race organizers. First, they have to pay $1,000 to apply for the special permit. They have to submit a Quality Assurance Plan to the DOEE at least 28 days prior to testing the water. After that, they have to send the water samples out to a separate lab, of course paying those lab fees themselves. The water gets tested for E. Coli, PH, and turbidity; essentially, the bacteria levels, the acidity/alkaline levels, and the cloudiness of the water. Then, the lab report gets sent over to the DOEE for review, at the latest 48 hours before the event. After reviewing the report, DOEE either issues the special permit, or denies it. Hence why, two days before the event, the race organizers had to cancel the swim. Their permit application with the DC government was denied. (DOEE Potomac Swim Event Approval)

I wanted to write this post to help others understand why the swim was cancelled, and why it was cancelled so far in advance. The race organizers are partially at fault, but the real anger should lay with the DC government for two reasons. One, because they have a ridiculous permit process to jump through. And two, because for some reason, one of the most beautiful cities in America can’t keep it’s water clean of sewage! DC should be absolutely ashamed that they haven’t done more to amend the sewage system to not dump human waste into the river. As of 2011, the sewage system was directing about 2.5 billion gallons of sewage into the Anacostia and Potomac Rivers per year (DC Water Press Release, 2011). DC Water does have a construction plan in place to reroute DC’s sewage further south of the city; however, looking at the plans for DC’s Clean Water Initiative, it appears we can’t expect the new sewage tunnels to be finished until 2025/2030. (DC Water Clean Rivers Initiative, April 2016). 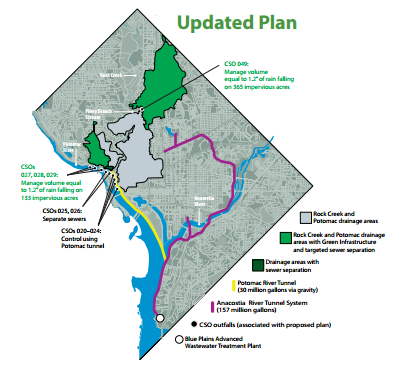 Since it seems like residents can’t expect a clean Potomac until 2025 (at least) maybe it’s time the Nation’s Triathlon race organizers start looking at other venues to hold the race. Now, when the DC special event water permit gets approved, it is a beautiful venue, and a wonderful swim. However, at this point the swim has been cancelled so many times, leaving many athletes angry and with no refund/transfer option, the race organizers should look to move the swim portion out of DC’s water jurisdiction. One option is National Harbor, just south of DC, which falls in Prince George’s County. PG County doesn’t have a ban on swimming in the Potomac. They advise against it, but there isn’t an outrageous permit process to jump through hoops for.

So, please, first don’t be angry with the race organizers, and secondly, remember this DC government overregulation and blatant abuse of a natural resource come Election Day. If triathlete’s could vote for one thing, I’m sure it would be a perfect race day, swim included.