It’s always a PR if you’ve never done it before.

Peasantman was my first Olympic triathlon, and my first race of this season. It was a great warm-up race, and I learned a lot. Specifically, I learned to “embrace the suck.” As in, I sucked, but I’m embracing that and am tailoring my next couple of training weeks towards fixing my mistakes.

Woke up at 4 after a fitful 5 hours of sleep.

Gathered my packed gear, grabbed my food and coffee, and headed out the door to pick up my friend Daisy. We made it to the race venue (Lake Anna State Park, VA) by 6:45 and set up our transition by 7:20 easily. I ate on the drive down, and ate some more approximately an hour before the race. We put on our wetsuits and did a bit of warm-up swimming around 8:45. So very thankful for the late race start of 9am.

The warm-up swim helped calm my nerves substantially and it helped to get that 65 degree water in my wetsuit before the race. I started fast and my heart rate skyrocketed to 165 bpm. I spent the next 600 meters trying to calm my heart down to no avail. Peasantman ran a sprint and an olympic race at the same time, where the sprint completed one lap of the swim, bike, and run, and the olympic completed two laps of each. So 750m, out of the water, around a cone, and back in for another lap. The second lap went much better than the first.

They had wetsuit strippers right off the beach at the swim, which was incredibly nice. You literally lay down and they pull it off of you, sending you on your way within 15 seconds. Up a hill, into transition, and on to the bike. My T1 times are consistently slow; I need to focus on calming down once I’m on the bike, not while I’m in T1.

The bike went alright; I settled down after 8 miles or so and was able to actually drink and get a Gu down. My heart rate was still substantially higher than I had been training at, and I knew it would be a problem for the rest of the race. I was finally able to get it down in the 150s on the bike. The Peasantman bike course is…interesting. It’s frustrating and very curvy in places. There were only a few sections where you could actually pound it on the bike. That definitely brought my projected bike speed down. Around the first lap, and around the second lap we went. 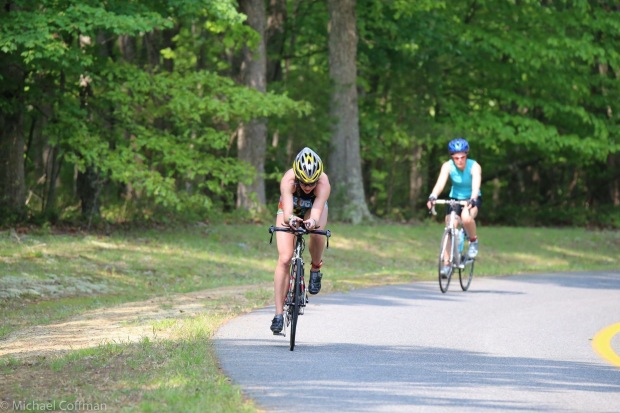 T2 was quick and painless, although the run out section of it was frustrating. They utilized a section of sidewalk that was a narrow chute.

The run was moreorless a loop, with an initial out and back turnaround of running up a hill then back down it. Frustrating again, particularly because you had to run past some people who were barbecuing, not once, but twice (remember two loops of each). The first mile+ of the run loop was up a low grade, mentally debilitating hill. Around mile 2, my quad cramped for the first time in my life. Super weird. Stopped to rub that twice throughout the run course. It would abate for a bit, then return a mile later. I finished the run bitterly disappointed in myself. The entire run sucked, and my legs never really lost the brick feeling. I also ran it under the assumption it was a 3.1 mile loop, so mentally I beat myself up about my run finish time. Only to realize today that they had miscalculated the course at it was actually 7.4 miles total.

Peasantman is a low-key triathlon, with over 50% of participants being first time triathletes. It was a great season opener, and I know exactly what I need to work on (that swim heart rate, nutrition on the bike, and coming off the bike stronger to give more in the run). The course was frustrating; if I do Peasantman again next year, I’ll only do the sprint. Doing two laps of the exact same course was frustrating, and mentally draining.   Especially because with Peasantman, you can race whatever you want, so quitting happens all over the place. You’re tired? Only do one lap on the run. You’re a weak swimmer, only swim one lap instead of two. It was so tempting to quit after the first lap of that dreadful run, but I had a mental victory and pushed myself through the second lap. That was one of the rare positives of the day. 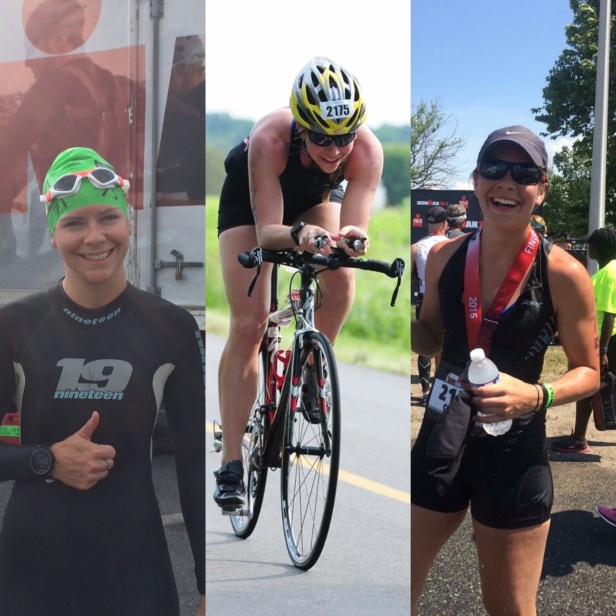